Now you will be redirected to the Maxa EL family

You can also purchase set of two (1 и 2 ) ready-made templates out of fiberglass.

To correctly set up flap an aileron deflections in relation to the TX sticks movement, we recommend the following arrangement: 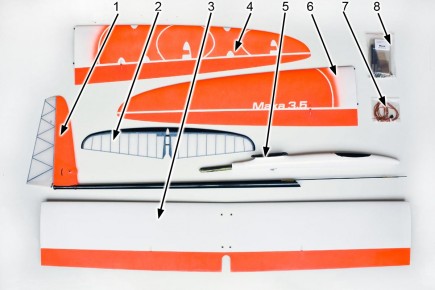 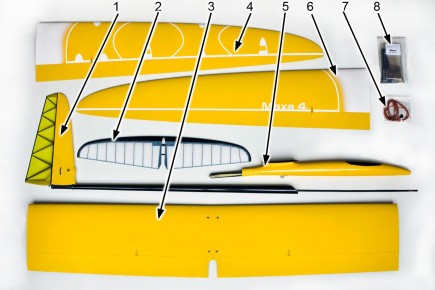 13 – Wires for connect the receiver to the wing connectors.

Recommended equipment not included to the kit 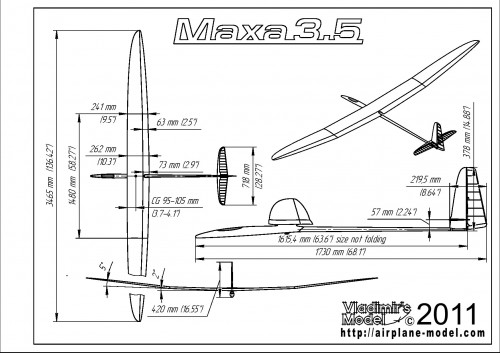 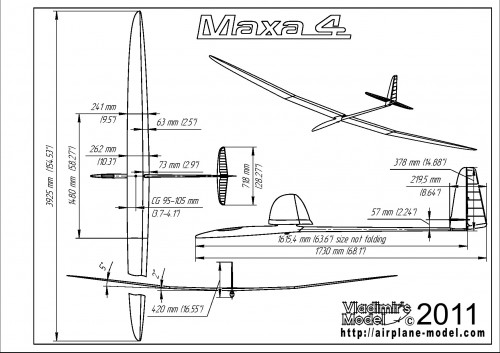 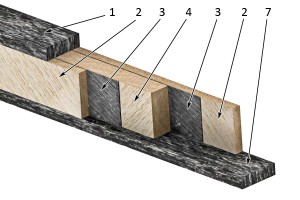 1 – flanges hot cured from carbon pre-preg in an autoclave;

Maxa’s wing spar is cured at high temperature under vacuum.  The spar flanges made in an autoclave  from high strength carbon pre-preg are securely glued to the multi-layer web. We use high strength  carbon fiber IMS 65 for the flanges.

The spar durability is improved by the use of balsa shear web. Balsa is more durable than any other material in this role.  Placing balsa at ±45 degree bias not only improves it ability to carry shear load, but also improves the strength of the glue joint between the web and the flanges.

Additional layers of Spread Tow carbon improve the stiffness of the wing spar.

To build wing for Maxa, we use bi-axial carbon Spread Tow fabric of our own proprietary design and production, made of high strength IMS65 carbon fibers.  The weight of this fabric is 38…40 gram/m², which leads to lighter and stronger parts. 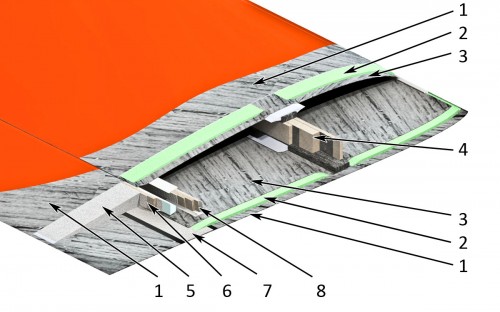 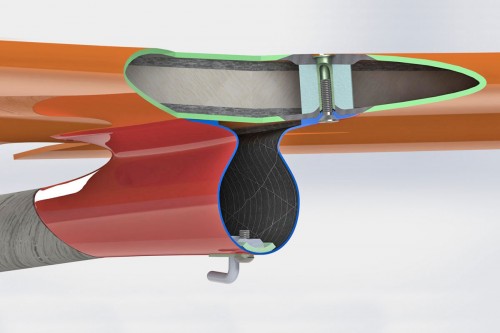 Advantages of the ultra-stiff Maxa fuselage:

- The fuselage is attached to the bottom of the wing with 4 screws to facilitate the assembly—you don’t need to turn the plane over, after you plug the wing servo connectors.

- The wing structure is tied together with special shape nut, which is glued through the whole thickness of the wing.  Such design better spreads shock loads of hard landings.

- The sharp nose stops the glider at the landing target.  The shape of the tip meets F3J requirements.

- The tilt junction the tail boom with nose, in addition to the elegant appearance, greatly reduces the stress concentration at this location;

- Maxa ships with the completely assembled pod with tow hook and ballast tube already installed.  The tail boom has the pushrod sleeves already installed and the vertical stabilizer glued on.  You only need to glue the pod and the boom together.

- The Adjustable Tow Hook allows for launch optimization for any weather or C.G. location in the recommended range;

- Fuselage servos are installed horizontally, which allows for easy access to the receiver and the battery (see more on the manual bookmark).

- The front part of the nose is radio transparent made out of kevlar and high modulus fiberglass. You can place an antenna of 2,4 GHz receiver inside the  nose (to the end of the canopy). 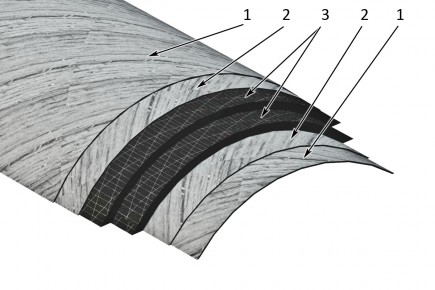 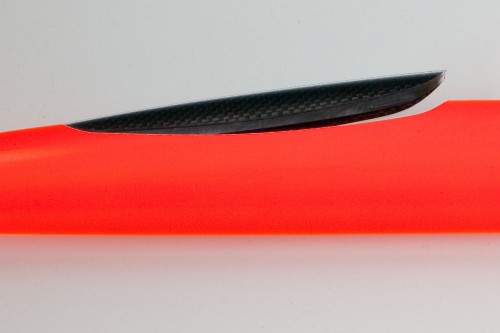 The Tail Boom is made from thin carbon Spread Tow laid at +45 degree (1) and -45 degree (2) bias.  Between the Spread Tow layers, there are 2 layers  of unidirectional high strength carbon fiber (3).  This design yields stronger, stiffer, and more thermal stable tail boom, which weighs only 41 gram without pushrods. 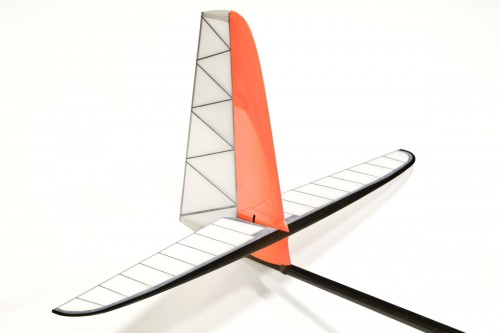 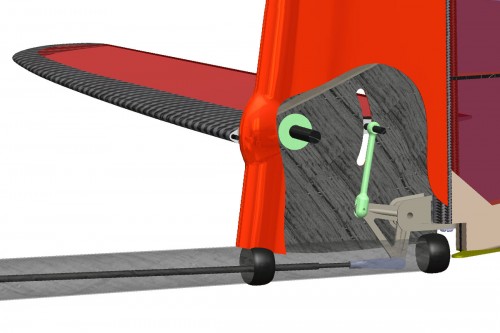 The horizontal stabilizer is now located higher up, which increases the launch safety.

The new design together with Vladimir’s Model trademark D-box built-up tail structure reduce the weight and increased the stiffness of the whole control system.

The tall and stiff vertical stabilizer gives Maxa good yaw stability and control even at low flight speeds. The horizontal stabilizer doesn’t shadow the rudder, which improves its efficiency.

The light built-up rudder can be taken off to reduce the fuselage length for ease of transport, this requires removing only one screw at the bottom. The screw with precisely ground stem slides into the bearing, which contributes to the accuracy and the stiffness of the yaw control, which is crucial for high energy launches.  The composite tube serves as the rudder spar, which results in its extremely high torsional stiffness.

Stabilizer Maxa - is an embodiment of the latest model aircraft technology. It was first applied technology Rohacell postforming. Because of this we were able to achieve incredible detail inlaid geometric accuracy of the airfoile. The use of whole-core enabled us based on D-box construction using ultra-thin lining of Spread Tow Carbon (Carboline).

The result is well balanced and light rotating horizontal stabilizer provides the required pitch stability. Its weight together with the joiner is 36 gram.

We have beefed up the horizontal stabilizer’s pivot, which resulted in substantial stiffness increase of the whole control system. The elevator pushrod is under tension, then you push the elevator up, which results in more precise elevator control.

Excellent control at low speed is achieved with the help of larger horizontal stabilizer area, which results in more accurate landings.

Our advanced CAD/CAM design and manufacturing yield unmatched accuracy of all the parts. 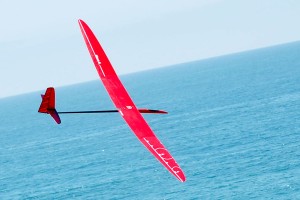 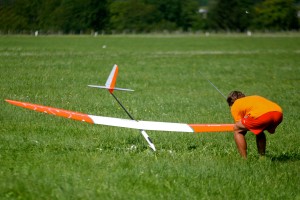 Maxa is a combination of ultra-modern aerodynamic design by Joe Wurts and optimal structure from Vladimir’s Model.

1) The soaring duration was increased by new aerodynamic solutions from Joe Wurts and reduced weight of the new structure from Vladimir’s Model;

2) The landing accuracy is improved by reducing the plane inertia, increasing the efficiency of the control surfaces at very low landing speeds, and the shape of the pod, which stops the plane as soon as the nose touches the ground;

3) High speed dynamic launches are greatly improved due to low drag of the wing and other part of the plane as well as by the increased stiffness, which is especially important at high speeds of the launch;

4) Penetration, the ability of the glider to return from distant thermals without loosing much altitude, is improved by the exceptional aerodynamic properties of the new model.

Maxa 3.5 is the universal soaring leader for any weather.

This glider takes advantage of even the weakest morning thermals, thanks to its light weight. High structural stiffness and novel aerodynamics allow Маха 3.5 to easily climb and return from distant thermals even in the windy weather.

Efficient wing mechanization permits accurate control of the flight speed not only on landing, but also during the search for thermals.

This glider has no competition in the absence of lift in the morning or in the evening.

Increased wing span also makes it easier to see the plane from a distance.

Maxa 4 climbs with confidence, when everybody else complaints about lack of lift.

The main advantage of long booms is to improve longitudinal stability of the model.

Hypersensitivity to flows, improved handling model, especially on small landing speeds (this also make more accurate landing), will allow you to fully realize themselves, and enjoy the flight.

The use of our proprietary, made in-house, high strength Spread Tow carbon laminates resulted in a glider with world lowest wing loading.

Wide selection of colors allows you to customize your model to reflect your unique style.

You can select the version, which best fits your needs, using the following table.